skip to main | skip to sidebar

We’ve all woken up at one time or another from a dream where for the briefest of moments we’re not sure what was real and what as a dream, and if it was a nightmare you were escaping it can be quite disturbing. It’s in the film Before I Wake that director Mike Flanagan explores this line between the waking world and the dreaming world, blending the fantasy and horror genres so as to give us all nightmares while also exploring aspects of loss and healing; a noble goal that he comes close to achieving.

The movie centers on Jessie (Kate Bosworth) and Mark (Thomas Jane) Hobson, a couple who had recently loss their son Sean (Antonio Romero) in a tragic bathtub drowning incident. They aren’t doing that well in the coping with tragedy category as Jessie is still attending support groups while Mark is slowly pulling away, but they somehow come to the conclusion that their marriage can be saved if they foster a child. This idea is unhealthy to say the least. Enter Cody (Jacob Tremblay) an eight year old boy who lost his mother when he was three and has bounced from on foster home to the other ever since. That one foster parent is in a mental home while the last couple abandoned Cody, or so the authorities assume, should give one pause, but as Cody is a very quiet, resilient and self-reliant child the Hobsons thinks he’s just what the doctor ordered. Maybe if the doctor was Joseph Mengele.

“I’m a nice kid, but my emotional baggage will kill you...literally.”

Cody really is a sweet kid, he’s no Damien from The Omen movies, but he does have one little quirk, when he sleeps his dreams manifest themselves in the real world. Cody does his best to stop this from happening by drinking as much caffeine laced beverages as he can smuggle into his room, but eventually sleep will win out and the dreams begin. At first the Hobsons are enchanted with this miraculous “gift” as they find their home filled with beautifully dreamlike butterflies. A bit of magical whimsy is something these two could definitely use, but we in the audience eagerly wait for the inevitable other shoe to drop.

No one informed them they weren’t in a Disney flick.

In the Hobson home the couple had taken down all the pictures of them and their recently deceased child, all but one, and this one picture is enough to spark a dream version of Sean to wander into the living room. Having no children of my own I have no idea how I’d handle the sudden appearance of a dead one, but as horror movies are my bread and butter I’m betting I’d handle it with a lot more running and screaming and less hugging than these two do.

They don’t even once consider calling the Ghostbusters.

It’s at this point Jesse and Mark find themselves with vastly differing opinions on how to handle this amazing situation; Jesse shows Cody home movies of their late son so that the dream version can talk and better interact with them, while Mark thinks this is verging on abuse as they are using Cody, a boy they are currently responsible for, as a walking home theater projector. Jesse claims this will help with the healing process but Mark knows this has nothing to do with healing and more to do with never letting go. Unfortunately for Mark he never really gets a chance to say, “I told you so.”

You see it’s not just dreams that manifest when Cody is asleep but his nightmares as well and the chief product of these nightmares is a spindly creature he calls The Kankerman, a being that whisper into his sleeping ear that, “I’ll always be with you.” The real problem for all involved is that these aren’t some holographic images Cody has created but beings with a very physical presence, as long as he is asleep that is.

Before I Wake does have some good scares, and the perquisite annoying jumps scares, but the CGI monster stuff needed a bit more work and though not a complete let down they do the movie no favors. The film sports a good cast and deals with some very heartfelt issues but sadly when the film reaches its startling climax, after Jesse has investigated and discovered the truth behind The Kankerman, the film continues on with an overlong and unnecessary coda. Instead of being a taught 83 minute horror/fantasy movie we get a 96 minute one that kind of peters out during the last ten minutes until the end credits eventually roll. The film’s weak ending isn’t enough for me not to recommend the film, as the performance by Jacob Tremblay is easily worth the time, but a tighter script could have made this movie as effective as Andrés Muschietti’s horror film Mama, a movie that Before I Wake is desperately trying to emulate. Where the ghostly abilities of the villain in Mama was clearly defined those of Cody in this film are left rather vague.

We needed Charles Xavier to show up and explain Cody's mutant powers.

I don’t need to have everything spelled out for me, a little ambiguity can go a long way, but one question kept hounding me through out this film, in the five years he’s been bouncing in and out of orphanages and foster homes how has no one discovered what is going on with this kid? Sure we meet one foster dad who is a nut house after claiming Cody’s dream monster ate his wife, but with the amount of death and carnage we see in just these few days only a massive government cover-up could possibly keep Cody’s abilities secret. Unless we are supposed to believe that Code can stay awake for years at a time. The blending of fantasy and horror, along with the exploration of dreams and how we use them to process information, all make for some heady subject matter, and though this film fails slightly in the execution it is still well worth checking out.
Posted by Movie Mike at 9:25 AM

Welcome to the Cave 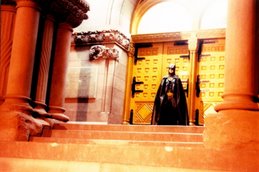